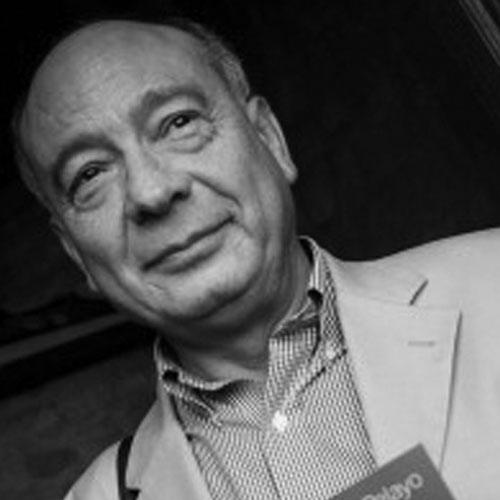 After taking studies combining Law, Administration, Cinema and Art History, he graduated from UNAM with a degree in Law, then moved on to a Master’s at ITESM in Monterrey. He continued with studies in Cinema and Television in London and a Specialization in Cultural Management and Policy offered by UAM, the International Labour Organization, and the Mexican Office of Foreign Affairs (SRE). He earned a Doctoral degree with honors in Art History at UNAM, defending a thesis on Mexican cinema in the 80s. His career has alternated between academia and the world of cinema and television. He was a full-time professor and director of the Administration program at ITAM, and has given courses on the history of Mexican and international cinema. He has made four feature-length films, all of which earned him national and international awards: La víspera (1982), Días difíciles (1987), Morir en el Golfo (1989) and Miroslava (1992). He also directed two television series: Los que hicieron nuestro cine and Los que hacen nuestro cine for Canal Once and Canal 22, respectively. As well, he has been general director of the Cineteca Nacional and the Instituto Mexicano de Cinematografía (IMCINE). From April 2001 to October 2013, he was cultural attaché for the Mexican Consulate in Los Angeles and visiting lecturer at the University of California in Los Angeles, giving courses in Mexican cinema. In 2012, IMCINE and Conaculta published his book El cine mexicano de los años ochenta: La generación de la crisis. He is currently General Director of the Cineteca Nacional.