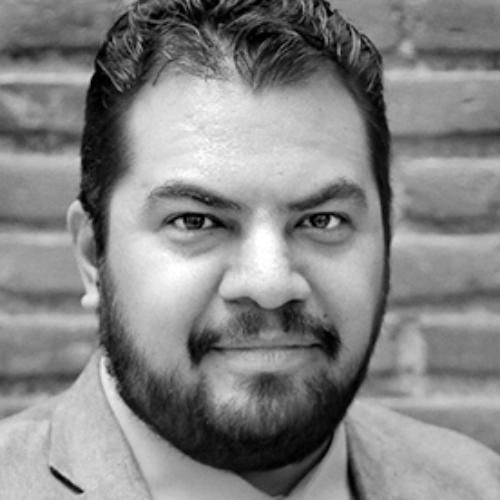 Alfredo Loaeza (Mexico City, 1977) is a filmmaker and communications expert who graduated from the National Autonomous University of Mexico (UNAM) and the Center for Film Training (CCC).

He has participated in over a hundred audiovisual productions in numerous roles, including as a producer, sound engineer, assistant director, and location manager. Noteworthy collaborations include Corazón del tiempo (Heart of Time), directed by Alberto Cortés; Las buenas hierbas (The Good Herbs), by María Novaro; Familia tortuga, by Rubén Imaz; On the Road, by Walter Salles; Pastorela, by Emilio Portes; and La 4a. Compañía (The 4th Company), by Amir Galván and Mitzi Arreola, among other films.

Loaeza has worked on film and audiovisual projects with renowned directors such as Luis Mandoki, Carlos Bolado, Walter Döehner, José Luis Guerín (Spain), and Lucía Puenzo (Argentina), as well as with notable young directors like Nicolás Pereda, Elisa Miller, David Pablos, and many others. His academic activities include classes and keynote speeches at Mexico’s Higher School of Film, the Faculty of Political and Social Sciences at the UNAM, and the CCC, among other institutions.

He is the author of 10 short films, including Locaido, el héroe (Locaido, Hero), with which he participated in the 2010 Berlinale Talent Campus. He also directed a couple of documentary shorts for the UNAM’s Astronomy Institute in 2011. In 2013, he received an Ariel Award nomination for Best Sound Engineering with the film El sueño de Lú (The Dream of Lu).

From 2012 to 2017, he supported the executive coordination of the Economic Stimulus Program for Film Production, run by the Mexican Film Institute, contributing to its development and operations.

Loaeza is currently the general director of the CCC. He continues to pursue his vocation as an independent film production professional and a teacher on the subject of sound in cinema.